The state's transport agency has been warned that the amount of highly contaminated sludge dredged from Sydney Harbour for a multibillion-dollar road tunnel and barged to White Bay in the city's inner west could be "more significant" than predicted.

The warning from the Port Authority of NSW comes as the proposed Western Harbour Tunnel faces stiff opposition from schools, councils, residents and community groups.

The vast bulk of nearly 1450 submissions responding to Transport for NSW's plans for the road project are opposed, citing fears about the impact of construction, the loss of parkland and emission stacks to be built for the tunnels. 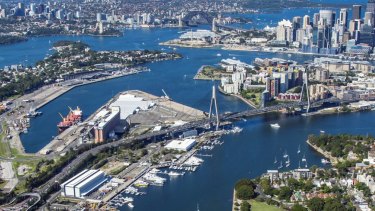 Highly contaminated spoil will be barged to White Bay in Sydney’s inner west.

The project includes twin 6.5-kilometre tunnels from an underground junction for the WestConnex toll road at Rozelle to the Warringah Freeway at North Sydney.

The tunnels will be built in a trench on the harbour floor, and large pre-fabricated concrete tubes lowered into place from barges above.

With construction due to start within two years, the Port Authority highlighted "gaps" in the environmental report about contaminated spoil from the harbour floor.

It said the environmental report did not "present sufficient information about the extent and significance of contaminated material to be transferred to and handled" at White Bay.

While much of the sludge dredged to clear a path for the tunnel tubes will be dumped at sea, the environmental report states that some 142,500 cubic metres of contaminated sediment from the top 1.5 metres of the seabed will have to be treated onshore before it is trucked to landfill.

It prompted the Port Authority to warn that the volume estimates, predicted environmental impacts and infrastructure requirements at White Bay "could be more significant" than forecast in the report once the extent of sediment contamination is "adequately understood".

"Port Authority is concerned about potential impacts of handling contaminated materials given the proximity to nearby residential areas and port activities (for example, odour, volatile emissions) at Glebe Island and White Bay," it said.

The proposed handling area for the contaminated spoil at White Bay is fewer than 150 metres from homes and apartments.

A strata committee representing about 2000 apartment owners and residents in buildings near the White Bay site also raised concerns about the handling of contaminated spoil.

"Our owners purchased their apartments in good faith … with no warning from the NSW government that such adverse impacts could be imposed. The proposals represent a blatant betrayal," it said.

Inner West Council, one of three councils to oppose the project, said it still held concerns about the handling of contaminated spoil at White Bay and another site at Yurulbin Point on the Balmain Peninsula.

"Even with adequate regulation and best intentions, there is always a chance of an unforeseen spill or other pollution event, and this could take some time to rectify," it said.

The council also raised its "strong concerns about unfiltered emissions" from three ventilation stacks at Rozelle for both the Western Harbour Tunnel and the third stage of WestConnex, which is under construction.

Parramatta River Catchment Group warned that the Dawn Fraser Baths at Balmain, other nearby swim sites and rowing clubs could be adversely affected by sediment from the dredging.

But Transport for NSW said in a statement that it was "confident our work can be completed without posing significant risk" to the marine environment or users of the harbour.

"What we are planning is similar to previous work already undertaken on many projects within Sydney Harbour, including at Garden Island last year," it said.

Schools on Sydney's north shore such as SCECGS Redlands voiced their opposition to the project on health and other grounds. Wenona School, which has about 1200 students, argues it will significantly reduce the size of nearby parks, reserves and sports areas. It also has concerns about vehicle emissions from a ventilation stack to be built nearby on Ernest Street at Cammeray.